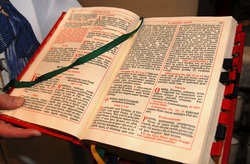 Here is an article that was written about the Latin Mass apostolate in Lancaster.

City church has been celebrating Tridentine Mass since May, drawing between 70 and 100 people during the past couple of months.

That Latin phrase — Glory to God in the highest — will likely be sung by many churchgoers on Christmas Eve as they belt out the refrain from “Angels We Have Heard on High.”

But for one Lancaster Catholic church, the entire midnight Mass will be said and sung in this ancient language.

St. Anthony of Padua, 501 E. Orange St., has been celebrating a traditional Latin Mass, known as the Tridentine Mass, since May, nearly 40 years after that tongue had been silenced there and in most Catholic churches.

This traditional Latin Mass, held every Saturday at 6 p.m., has been drawing between 70 and 100 people during the past couple of months, says Erick Wittemann, one of the driving forces behind bringing the Latin Mass to St. Anthony’s.

The Mass is celebrated by the Rev. Frank Parrinello of the Mater Dei Latin Mass Community in Harrisburg. St. Anthony’s pastor, the Rev. Daniel Mitzel, is not trained in traditional Latin Mass, also known as the extraordinary form of the Roman rite. (The ordinary form is spoken in the language of the people.)

But he was open to making this other form of liturgy available at St. Anthony’s, where over the years, people of different languages have worshipped.

“We’ve had German, Italian, Spanish, Vietnamese. …Why would I say no to people who want to go back to Latin?” says Mitzel. “Here was a group that needed a spiritual home to celebrate Mass the way that they could praise God and be nurtured.”

These worshippers seek a different experience.

“There’s a sense of noticeable solemnity in the celebration of the traditional Latin Mass that people can experience,” says Mitzel. “The Latin Mass does help a number of people to connect more easily with the transcendence of God.”

The traditional Latin Mass was used by the Catholic Church for nearly 1,500 years. In that form of worship, the priest faced the altar and not the worshippers, people knelt at Communion, with the host placed on their tongues instead of into their hands, and women customarily covered their heads.

The Latin rite fell out of use following the Second Vatican Council in the 1960s, which directed that the Mass to be said in parishioners’ native languages.

In 1988, Pope John Paul II loosened the restrictions on Latin Masses, and in July 2007, Pope Benedict gave his full blessing for traditional Latin Masses to be celebrated.

That encouraged Wittemann, who maintains a membership at the Mater Dei community.

“This is actually something I’ve been praying and working for about 10 years,” says Wittemann, an elementary school teacher who lives in Strasburg Township.

Wittemann, a former Protestant who converted to Catholicism, first experienced a Latin Mass at St. Gregory’s Academy in the Scranton diocese about 12 years ago while vacationing in the Poconos.

“It was an epiphany for me. It was life-changing,” he says. “There was something that moved within me, and I would say it was the Holy Spirit that completely changed my whole outlook on the Catholic faith. It really seemed to come alive in me.”

Wittemann began to attend a Latin Mass in Baltimore, and about 10 years ago, he and some others formed a group to pray the rosary for the establishment of a traditional Latin Mass in Lancaster. They even circulated a petition, but the bishop of the Roman Catholic Diocese of Harrisburg at that time, Nicholas Dattilo, did not grant permission.

He did, and St. Anthony celebrated its inaugural Latin Mass on May 24, drawing about 300 worshipers.

At a typical Latin Mass at St. Anthony’s, a choir, directed by Beverly Schneller, leads the singing of the “ordinary” prayers that are heard each week, such as the Kyrie, Gloria, Credo, Sanctus and Agnus Dei. They also sing the “propers,” prayers that do change. The sermon is in English, and the readings are translated.

Once a month, this singing is done by the Te Deum Laudamus Schola, a men’s group that specializes in Gregorian chants.

In addition to the weekly Saturday Masses, holy days of obligation, such as the Dec. 8 Solemnity of the Immaculate Conception, have also been celebrated in Latin.

Next up: the Feast of the Nativity, which will begin at midnight Wednesday with an organ prelude and carols in Latin and English led by the Schola. The Mass itself begins at 12:15 a.m.

The Christmas Eve Mass will follow the usual order of a Latin Mass but will have a greater air of pageantry, with incense and additional servers.

Wittemann, a member of the regular choir, is especially looking forward to celebrating the birth of Christ using the Latin language.

“What will really gladden my heart is knowing there are Catholics coming back who miss the Latin Mass from many years ago. More important than that, the solemnity and the beauty of the solemn high traditional Mass with all that comes along with it.”

All that goes with it — the incense, the beautiful stained glass windows, the chants — is, says Wittemann, “Ad Majorem Dei Gloriam” — For the greater glory of God.

A Brief History of the Mater Dei Latin Mass Community


In 1984, Bishop William Keeler authorized Monsignor Fuhr to celebrate the Traditional Latin Mass at the chapel of Trinity High School, located in Camp Hill, a suburb of Harrisburg, at 5:30 p.m. on the first Saturday for three months.

Bishop Nicholas Dattilo, who succeeded Bishop Keeler, continued the 5:30 p.m. monthly mass on the first Saturday of each month in the chapel of Trinity High School.

In April, 2005, Bishop Kevin C. Rhoades, "out of pastoral concern for those in the Harrisburg diocese who have requested a more frequent celebration of the Traditional Mass," authorized a weekly Sunday morning mass at the St. Lawrence Chapel of St. Patrick's Cathedral to be celebrated by a priest from the Priestly Fraternity of Saint Peter, beginning on May 1, 2005.